Changing the way we see people with dementia 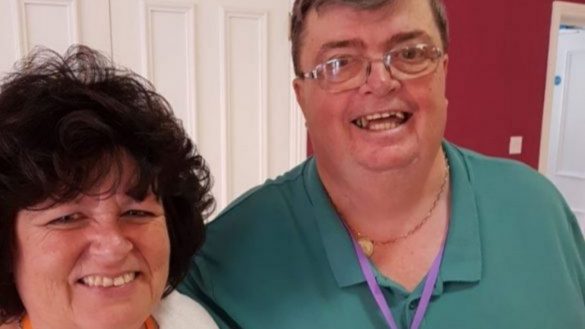 Purple Angel provides a really valuable support network for those with dementia and for families and carers.

Norman McNamara a resident of Torbay, Devon, UK was diagnosed with dementia at only 50 years of age.

Whilst out shopping one day he was rudely spoken to by a shopkeeper and decided to change the way people see dementia and treat others.

Norm began by asking his local shop staff to read two pieces of information so that they could better support people with dementia and their carers.

He wrote the “Guide to Understanding Dementia” and put that together with “What is Dementia” written by our Alzheimer’s Society.

Two weeks later he returned and, if staff had read, awarded a Purple Angel Logo for their window.

There are now over 600 ambassadors, all with their own teams of volunteers.

Many towns in the UK began raising awareness with The Purple Angel, taking the information to their local shops and businesses.

On a Facebook “Dementia Aware” page many others began to form dementia-friendly communities and were inspired by the success of the project.

Many Purple Angel Dementia Action Alliances now have their own steering groups and the word is spreading to other areas.

It became apparent that many other organisations were needed to be included such as hospitals, first responders, rescue services, schools, scouts, etc. and resources was developed to address different situations.

A book was written for young school children by Max Wallack in the USA and is being translated into other languages by purple angel ambassadors and talks held in schools in order that our young can grow up understanding dementia.

In places, new memory cafes were organised and events took place across the world for the new Dementia Awareness Day fundraising for dementia charities all year.

Many countries across the globe joined in the campaign and Dementia Friendly Communities started up together with Memory Cafes and other initiatives.

The Torbay branch meets on Saturdays (not the first Saturday of the month) between 1:30 – 3:30 pm at Barton Baptist Church — admission is free.

There’s a range of activities including some outings arranged throughout the year.

“Why Saturday?” As Norm says, “dementia doesn’t stop at weekends!” so there’s a requirement for activities and support every day.

Most community events don’t include weekends so a Saturday seemed a natural choice.

Torbay Branch Manager of Friends Helping at Home, Karen Breyley and Norrms McNamara pictured above at a recent Purple Angel event: new members are most welcome.

Find out more about Purple Angel.

Friends Helping at Home is an introductory agency as defined by the Care Quality Commission (CQC).

Friends Helping at Home is not a "full service" care agency and is unable to influence care delivery or manage care plans. br

We aspire to be the premier service in person-centred care and support. With time to care, we always place our clients and carers at the forefront in all that we do.

This website uses cookies to improve your experience while you navigate through the website. Out of these, the cookies that are categorized as necessary are stored on your browser as they are essential for the working of basic functionalities of the website. We also use third-party cookies that help us analyze and understand how you use this website. These cookies will be stored in your browser only with your consent. You also have the option to opt-out of these cookies. But opting out of some of these cookies may affect your browsing experience.
Necessary Always Enabled
Necessary cookies are absolutely essential for the website to function properly. This category only includes cookies that ensures basic functionalities and security features of the website. These cookies do not store any personal information.
Non-necessary
Any cookies that may not be particularly necessary for the website to function and is used specifically to collect user personal data via analytics, ads, other embedded contents are termed as non-necessary cookies. It is mandatory to procure user consent prior to running these cookies on your website.
SAVE & ACCEPT